These absolute and mixed cell references can sometimes make the formulas difficult to read, especially when you get into creating the likes of VLOOKUP and SUMIFS formulas. Therefore we can name cells and ranges or set a value to a name for use in formulas to avoid this.

There are multiple approaches to naming cells. First you need to know where to see the names you create. All cells in Excel have a default name – their cell reference, which is displayed in the Name
Box. The Name Box is located next to the formula bar underneath the ribbon.

To name a cell or range using the Name Box:

To name a cell or range using the ribbon:

If you have set out a table in your spreadsheet with titles at the start of each column and row within the table then you can use these titles to create named ranges.

To name cells based on table headings:

To navigate to a cell or range using its name:

Names can also be used for fixed values which you do not want to display on the worksheet.

To create a named value:

You can use the name of named cells, ranges or values in any formula in place of a cell reference via the

button, on the Formula tab, in the Defined Names group.

The SUM Function and the Formula Palette

The SUM function was discussed in the Creating Simple Formulas and Functions Reference Guide.

The Formula Palette can be accessed in a number of ways. Both the

button on the formula bar and the

button in the Function Library group on the Formulas tab, both open the Insert Function dialog box which allows you to search for the desired function.

The Formula Palette for your chosen formula will open.

The Formula Palette dialog box is titled Function Arguments. Here you create all the parts or arguments of your formula.

Each box represents an argument or part of your formula. Where the title of the box is in bold that argument is essential whereas titles not in bold indicate arguments which are optional.

The SUMIF function adds up cells where a given condition is met. For example it can be used to add up values for a specific advisor.

As well as opening the Formula Palette via the

buttons you can choose the desired function from the Function Library on the Formulas tab.

The SUMIF function can be found in the Math & Trig book of functions. 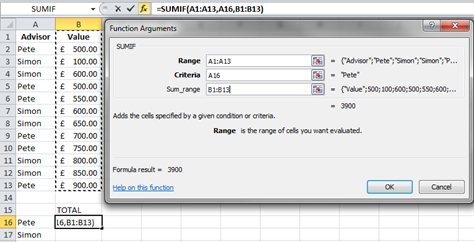 The example above shows a SUMIF being built to give the total for Pete.

In the formula palette, the Range has been set at cells A1 to A13, where the names of the advisors are listed. The Criteria is set as cell A16, which also has the name Pete in it to show that this is the total for Pete. Criteria can be entered directly into the formula palette, if preferred. The Sum Range is an optional argument. If no sum range is supplied the matching cells in the Range will be totalled.

The SUMIFS function can be found in the Math & Trig book of functions from the Function Library on the Formulas tab.

The SUMIFS function was introduced in Excel 2007 and so was not available in Excel 2003 and earlier versions.

This function allows you to specify multiple criteria to identify the records to be totalled.

Or in other words, the values are to be added up for investments in fund A as recommended by Pete.

VLOOKUP and HLOOKUP both do the same thing. They look up information in the leftmost column of a table and then return a value in the same row from a column you specify. By default the table should be sorted in an ascending order. 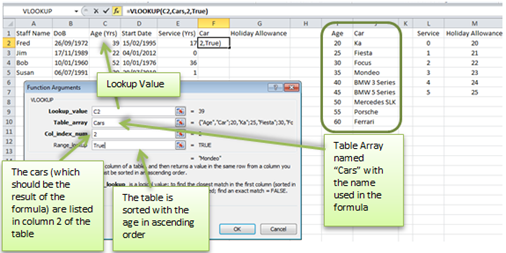 The VLOOKUP and HLOOKUP functions can be found in the Lookup book of functions from the Function Library on the Formulas tab.

The TODAY function provides the current date (based on your computers clock). This is very useful when calculating with dates and producing forms to name just two.

The TODAY function is also one of the simplest of Excel’s many functions as it needs no additional information (arguments).

The TODAY function can be found in the Date & Time book of functions from the Function Library on the Formulas tab.

If there is an error in a formula it can be difficult to track down. Fortunately Excel has several tools that can help.

When you click into the formula bar to edit the formula, cell references are shown in different colours, with the cells they refer to surrounded by a line in the same colour.

This way you can see the cells used but only whilst editing the formula.

Instead of using the coloured cell indicators when editing a formula, you can display trace arrows, which show which cells are referenced in a formula even when you are not editing the formula.

The Evaluate Formula feature demonstrates how a formula is being calculated and therefore can be particularly useful in tracking down errors that arise.

To use the Evaluate Formula feature: