Before I expound on my Saturday morning exploits at the Lewa marathon event, I feel honour bound to point out that I completed the half marathon. To those (including my husband) who completed the full marathon, I salute your bravery, stamina and foolhardiness with a degree of awe!

So, to an account of my 21km journey on foot through the Lewa Wildlife Conservancy. Not being a runner or having anything remotely approaching a runners’ physique I was very daunted by the challenge I had set myself and so had made a decision to walk the whole distance. So armed with my phone I set off with nearly 1400 others. Why the phone? For photos!

The day started with a 5am wakeup call followed by a speedy breakfast and we left Lewa Safari Camp for the start line at 5:30am. It was cold and dark outside but the excitement (& trepidation) amongst the runners and their supporters was palpable.

The marathon village was buzzing with activity when we arrived. Thankfully we got to park next to the start line (a perk of staying at a private camp during the event). Our 11 yr. old son was going to remain with our guide from the camp and had been designated our official photographer.

The previous day we had spotted a lioness and two young cubs close to the start line. Mum was well fed, but the vultures were now circling her kill. As the children’s 5km race route goes straight past that point, there was a slight delay waiting for the helicopter to scatter the vultures to allow the children safely past. Then they were off. I would really like to be as fast as some of those youngsters. They run for the pride of their schools and some fantastic prizes. The children are very keen to do their level best and it shows!

Then it was the turn of the adults. So we all piled into the start line. Hubby and I wished each other luck as he headed towards the front and I towards the back. At this point we were both more concerned about each other than ourselves.

After a bit of a warm up, carried out half-heartedly by most given how tightly packed we were, it was time for the off and after jogging for about a minute, the pack slowed to a walk. The start itself is fairly wide, but soon narrows to a single track meaning that if you are not at the very front, there is no option but to walk. However from the front you need to go fast or get caught in a stampede.

The snake of runners heading out along the route is even more spectacular from within the race than as a spectator. The density of runners meant that I didn’t get to photograph the 1km marker as I went through. 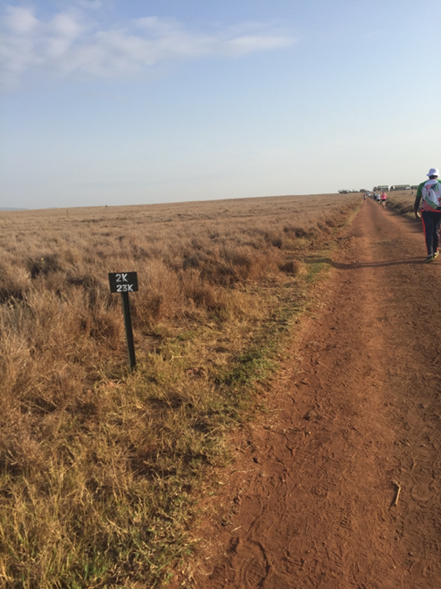 However, by 2km the runners were off and away, leaving the walkers with a much quieter route and time to look around, take in the scenery and enjoy the views. Admittedly in the distance, but I saw gazelle, zebra, rhino, giraffe and oryx as I went round. Having only my phone camera there was no chance of photographing the wildlife, so I concentrated on the scenery and the distance markers.

Water station 1 came just after 2.5km and supplied a welcome drink as the temperature was already climbing.

Approaching the 4km marker I spotted a rhino off in the distance. In fact the rhino is in my 4km market photo but it’s just a grey blob towards the bottom of the hill you can see.

By 5km and water station 2, I was fully warmed up and had found my pace, as had some fellow walkers who were around the same pace as me. We overtook each other along the route but all finished within 10 minutes of each other. So whilst the pack was now very thin and occasionally I couldn’t see anyone else this didn’t last more than a minute at a time. It was then just a matter of keeping going for another 16km. At the turn in the track down towards the stretch along the river (about 5.5km) there was a supporter set up which was not at designated water station or spectator point and although unexpected they were great fun to banter with. In fact, everyone along the route, even the guards and rangers, when you could spot them, were very supportive.

Water station 3 was manned by a lovely group of people including some children who were very vocal and generous in their support, no matter how slow you were.

Between water stations 3 and 4, just after the 8km marker, I was lapped by the leaders of the 42km full marathon race. During our race briefing, we had been told to keep left to allow faster folks through, so I was hugging the left of the track anyway, they just sped past. Whilst they were making it look effortless once we started going uphill towards water station 4 at 10km, even the two elite runners who passed me did look like they could tell it was uphill.

What I hadn’t realised driving around the route was how once you start going uphill from the river, the majority of the route until about 17km is climbing. There is the odd stretch of down and varying degrees of up within that. 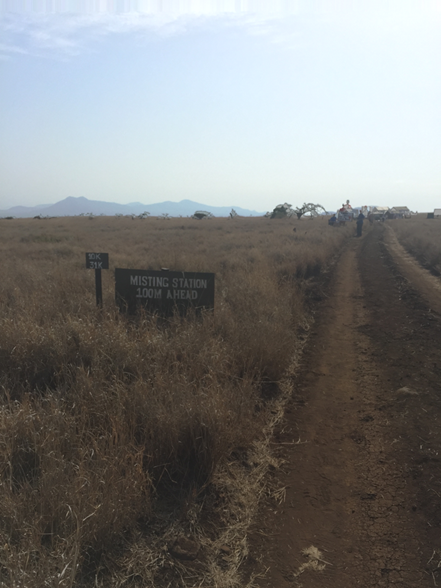 Anyway I’m at 8km at the moment. At about 8.5km is the start of the big hill. And it goes on all the way until 10km and water station 4. I was really pleased that I managed to keep my pace going all the way up the hill to the water station.

Just before the water station were some lovely ladies with a sign saying “touch here for a speed boost”. So I did. Even made me run a few steps. All good fun. Also very nice was the misting station there, the first of the route. Again a must do with the heat. The misting stations are plastic walk through showers of cold water and very refreshing. Unfortunately, the heat soon dries you out, so the cold water sponges are a must and these are at every water station.

At one stage I was offered a sponge as a “cold swimming pool” and it felt just as refreshing. So now I’m half way and heading towards the 11km marker.

Now I’m still feeling really good much, much better than I expected, even if I can feel blisters on the balls of my feet. Also I have got further than halfway with very few 42km runners coming past me. From now on I’m expecting to see my husband pass to lap me. Little did I know at this stage that he wasn’t on for a new personal best time, but more on that anon.

Between 12km and 13km I passed by the hill upon which we’d seen two cheetah brothers the day before. And the same area we’d see them the next day. I’m really glad I didn’t make the connection as I was going on along. It was only the following day watching two very full bellied cheetahs that it struck me.

Here are the cheetahs on Friday:

And again on Sunday:

At water station 5 I visited the first aid tent. You’ll be pleased to hear that I didn’t have any problems (well apart from the growing blisters), but I needed a sunscreen top up. Admittedly I looked VERY red, and those manning the water stations were getting concerned. I didn’t actually burn at all, so it was obviously a timely stop.

I think the minute or two in the shade after going through the misting station helped me a lot as well given how hot it was getting. In fact I’d highly recommend this tactic for anyone overheating, misting station followed by shade.

At 15km lurked another water station but just before it halfway up the hill was a photographer. As I hadn’t seen my photographer on the route, seemed like a good idea to cheer myself on with raised arms. He took set real photos of me. Mainly as everyone around me seemed unwilling or unable to put in an effort for him. Have yet to find those photos it will add here if I do.

The route now takes you around the back of Lewa House and it’s a definite up incline for the next two kms.

16km to 17km was very hot and I really felt the climb. This was probably the toughest part of the course for me. However I was very pleased that my husband still had not lapped me.

, again welcome (as a walker I picked up at a bottle at each station and sipped on it as I walked. Although it did mean carrying a bottle of water, it helped keep me hydrated without risking a stitch. 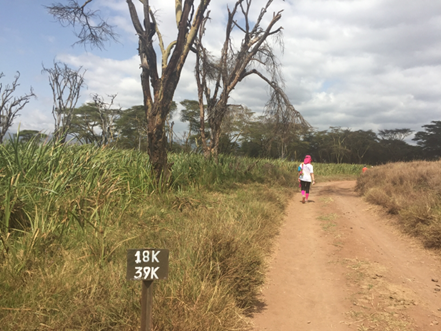 At 18km I was very relieved to reach the swamp and the cooler air followed by the shade of the forest. It was time to dig deep and just keep as close to the pace I had been doing. Having said that I’m positive that I slowed from about 17km. My other concern at this point was that hubby still hadn’t lapped me. So from about 18km I keep looking back trying to see him. I was torn between slowing to try and cross the line together and speeding up to try and prevent him lapping me. I also had a few misgivings about his fitness to complete this year, due to a chest infection (I’m ashamed to admit this now), so I just kept plodding on.

Between 18km & 19km I saw a giraffe close enough for a photo. Can you spot it?

This turn photo was taken two days before the event. By the time I reached here the full marathon option had been closed off and there were several rangers at this point on race day. I didn’t experience a single moment of doubt as to whether I picked the correct event at this point, though I have heard others describing their mental debate at this point. If you think you picked the wrong distance, there is always next year!

Unfortunately, the final misting station just before the turn was off when I got there. I’d really been looking forward to it.

Then it was on through the Lewa Conservancy HQ compound past the final water station and final spectator point. I still hadn’t seen any of my spectators though I did see others from our camp & Team Tusk.

I had planned to run across the line but having walked the whole event I decided not to give false impression by running over the line. And a good job too as my photographer wouldn’t have been ready for me if I’d run.

I crossed the line to be greeted by Mary-Jane from Tusk and my son telling me hubby hadn’t come in yet. I collected my medal and goody bag then in came hubby!

I can’t really claim to have beaten him, given he did double the distance but I did cross the line first so I am going to claim bragging rights.

If you like my story, please leave a small donation at:

http://uk.virginmoneygiving.com/fennahlewa this page is open until September 2016. Afterwards please send a contribution directly to Tusk UK (http://live.protectedpayments.net/PMWeb1?charityRef=803118&campaignRef=1). Or get involved yourself and raise funds by completing the Lewa Marathon or other event for Tusk.

A further blog will follow with a review of the whole trip. Watch this space!